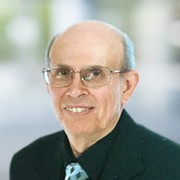 As the nation’s foremost professional options trader, Ken Trester isn’t just another “options educator.” He’s a pro who has been trading options since the first exchanges opened in 1973. In fact, he has documented 27-straight winning years publishing recommendations for traders.

Ken puts his money where his mouth is and actively trades his own account as part of his popular Maximum Options trading service. Using his own proprietary system called the Power-Plus Profit Tracker, he uncovers cheap, underpriced options trades for his subscribers. Since InvestorPlace began publishing Maximum Options in 2008, Ken has guided his subscribers to profits almost 80% of the time.

Ken has also written two books on options: 101 Option Trading Secrets and The Complete Option Player, now in its fourth edition and among the best-selling options books ever.

He is also widely quoted in publications such as Technical Analysis of Stocks & Commodities and Barron’s. He has earned considerable respect as a financial analyst and a highly sought lecturer at investment seminars throughout the United States.

Ken has an MBA and has also worked as a stockbroker, an investment manager and as a computer science professor at Golden West College in Huntington Beach, California, where he taught a wildly popular course on stock options trading.

Join Trade of the Day — FREE!

Get real-time stock & options trades from our all-star lineup of trading pros delivered to your inbox every trading day of the year.

Buckle is Set Up for Short Term Success

By Ken Trester, Editor, Power Options Weekly Feb 6, 2020
Nielsen Holdings plc (NYSE:NLSN) is one of the most well known providers of market research and analytics, and based on its technical formation, I think the company is going to push higher.

By Ken Trester, Editor, Power Options Weekly Jan 31, 2020
My indicators turned bearish last Friday, and because they continue to give solid sell signals this week, I am recommending a bearish put option on Las Vegas Sands Corp. (NYSE:LVS), the casino developer and operator.

Tesla is Strong But Overbought